We took another visit to the Iraqi marshes, they looked a lot like this

I was running across the ancient ruins of Ur the other day, not in the joyful manner of someone who finds pleasure in such things but as one driven by the fear of prematurely losing physical competences through disuse. I was listening to Kids with Guns by the Gorillas and had started to think the bass beat was sounding a bit out, when I was hit by an unexpected wind from above and behind. On investigation, there were two large helicopter gunships hovering right over me, covered in those pointy bits that drop off and explode. I didn’t quite know what the best thing to do was in this social situation, so I gave the nearer one a friendly wave. There was a brief pause and then they thundered off towards the Ur airbase in the knowledge of a job well done. It’s this sort of thing that reminds me I work in a ridiculous place, but it did give me an excellent excuse to stop running for a few blissful minutes while I found something calming to listen to on my ipod. 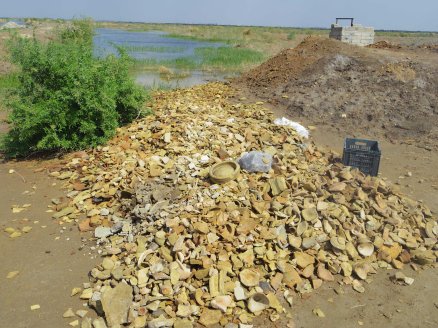 The bad pottery. It has been released back into the wild

Steve’s gravy train is about to derail

The weeks have flown, we’ve taken a lot of earth out of the trenches and then put most of it back in again, we’ve dug up a lot of pottery, numbered it, loved it and then dumped most of it back on site in a big heap. We’ve found a lot of things, most of them horrible things, and we’ve given them all numbers. We have waved farewell to Steve, queen among slightly stand-offish Iraqi site dogs, to whom we gave a whole can of sardines and received little in return. I spent far longer on the pictures for my report than on the words because the pictures are always the best bit. Our final task was to burn the accumulated rubbish including all the empties. We piled them in the centre so they’d receive maximum fire and created a raging inferno fed by strong winds. One of them exploded with an ear-splitting bang, but when the flames had died down the nature of the bottles was still painfully clear. So it came about that F and I spent twenty minutes throwing lumps of ancient baked bricks at a fire in order to smash burning empty bottles of Famous Grouse. It was only five minutes after we finished that a policeman showed up to investigate the explosion and the sounds of breaking glass. We said we’d just been burning some rubbish, officer.

Our eight weeks at Ur are up but this is not the end, oh no. One site is just not enough when you’re as red-hot keen on archaeology as we are. We’re in the middle of moving operations to Basra to start a whole new site between the oil fields out by the Iranian border. We went for a first look today and found it charming – flat and bleak and covered in debris from the Iran-Iraq war – it’s all I ever dreamed of. Near the western end of the fortification walls we found the eroded remains of an anti-personnel mine. 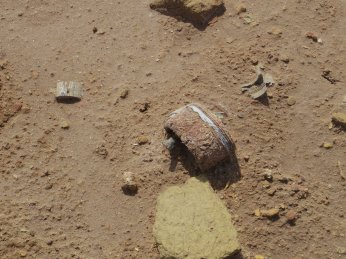 By the way, thanks for all the concern about my mental health after the last post, though that’s not really how I meant it to read.

I lie incapable in my hotel bed, being rejected for jobs and eating a dinner of Fanta and cheese Doritos

Today finds me in a budget hotel in Cairo feeling very crappy. I flew in last night from Manchester via Frankfort. During the second leg I sat next to a German girl who had the amusing habit of tearing a sheet of her enormous German newspaper in half next to my ear every time I was in danger of falling asleep. When she wasn’t doing this she was talking loudly to herself and throwing her salad at me. Having not slept for two nights and having a fever, I didn’t wholly appreciate her efforts, but I comfort myself with the thought that she might now also be unwell.

My preparation for going back to Egypt, as you may have guessed hasn’t been ideal. I went down to Oxford for a week to stay with my sister as it was our mutual birthday. This coincided with the start of the strange sub-zero cold snap that’s happening in Britain, meaning that I spent most of the week cold and drunk. 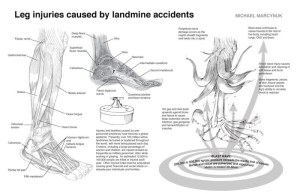 how to save money on shoes

By Monday night I was feeling too ill to sleep but still had to get up at 6am to go and learn about conventional and unconventional weaponry in London. I can’t pretend this wasn’t interesting; the tutors were a former Met police officer who’d worked on the Alexander Litvinenko case and talked affectionately of the poisoned bodies he had known, and a former SAS explosives expert who told us all about how bombs work and what happens when they do. He showed us videos of people doing it wrong and went pink in the cheeks when he talked about fuses. I learned that landmines are Bad, and that if I am exposed to mustard gas I should drink milk and take my clothes off. Anyway, it would all have been better if I could have been tucked up in bed instead of sitting in a freezing cold classroom.

how I walk now

Feeling by now very unwell, I took an evening train back to my parents where I picked up my stuff for Egypt, failed to sleep and went to the airport. I don’t feel shivery anymore, which is a good sign (unless it’s hypothermia), but all the horribleness seems to have congregated in my throat so talking and swallowing are messy. Another serious cause of unhappiness is the horse riding me and my sister did as a birthday treat on Monday, which is leaving me increasingly crippled as the week goes on. I did a lot of the lesson at the canter without stirrups; today I think my hips surely must be broken. Basically I feel like I’ve had my throat cut, been hit on the head and then beaten up.

I realise none of this has anything to do with archaeology. I’m off to cry over my broken body and have another sleep.