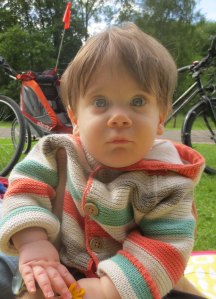 What?? What do you want from me?

I’m currently in the thrilling metropolis of Brussels but instead of doing what comes naturally – eating chocolate and waffles and drinking beer out of silly little glasses – I’m doing my familial duty. My brother, in collaboration with his wife I believe, succeeded in producing a second baby in the autumn which I’ve so far managed to avoid meeting through constraints of time, poverty and enthusiasm about children. I find that identifying conversational topics of mutual interest is a challenge with the under-threes; I’m not really comfortable with kids until they’re about, say, twenty-eight or twenty-nine.

Things got off to an unpromising start. I spent a night in London on the way down, where I went drinking with the department of Egypt and Sudan from the British Museum which is always a recipe for messy endings. I then watched a woman in the uniform of the Household Cavalry sing the theme to Skyfall to her horse (later I was unsure if this really happened, but have since been assured that it did), saw the queen, ate a kebab and slept (for about forty minutes) on a friend’s floor before getting the 6:50am Eurostar. I tried to use the journey to catch up on some sleep but only succeeded in waking up miserable and hungover in three different countries in the same morning. 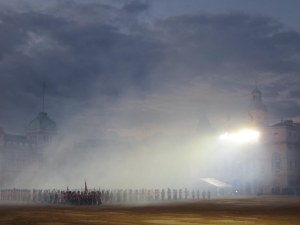 Retreat beating on Horseguard’s Parade; so much better on four pints, I wonder if that’s how the queen copes?

Against expectations, my brother has generated two children who look and behave almost precisely like all other human children, although like almost all other human parents he can’t be convinced they don’t possess special traits and abilities worthy of constant comment. I’ve spent most of the weekend trying to change the subject and not to use too many swear words. I was unsuccessful in both these efforts, my only achievement being to give myself a headache by gritting my teeth for three days. 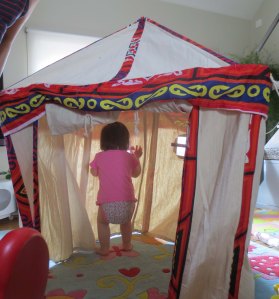 I brought a miniature tent from Cairo. If only it could be properly sound-proofed. And locked.

Back in the land of archaeology, my summer digging plans in Turkey are becoming increasingly jeopardised by all the protests. Demanding basic political rights is all very well but no one thinks of the foreign freelance archaeologists whose livelihoods are threatened as a result. The Egyptian revolution left me stuck for two weeks freezing my arse off in a one-star Cairo hotel ordering in from Subway, running out of DVDs and watching the tanks go round and round and who needs that again? Fortunately I’ve been offered eight weeks work digging a big hole in the middle of London instead if Turkey gets silly, which has the advantages of better access to sushi, pubs and West End theatre than is available in Turkish Kurdistan.

Digging up old stuff in hot places just passed 5,000 views. Thanks to everyone who’s taken an interest in my endless needy drivel about old crap and my terrible lifestyle choices. My future blogging aims are more creative swear words and fewer typos. Strength and honour, M.

And I just set up this twitter account for Old Stuff In Hot Places because I have too much work on and want to procrastinate more efficiently: @OldStuffInHotPs

Being thrown across the bridge was all part of the fun in my day: The new Enterprise seatbelts make me spit diet coke over the woman in front

It’s been nearly a week since I got back from Iraq and I’ve been making the most of my renewed opportunities. Yesterday I watched six hours of television, went to see Star Trek Into Darkness at the cinema, went to the pub where I drank five pints of mild and ate pork scratchings (the good and hairy kind) and had sausages for dinner. All my dreams are realised. Having been paid for the work in Iraq I’ve bought myself a gift of clean shirts and trainers that still have rubber on the bottom. The Inland Revenue sent me a welcome back present of yet another tax code which I’ve added to my collection. One day I will have the full set. 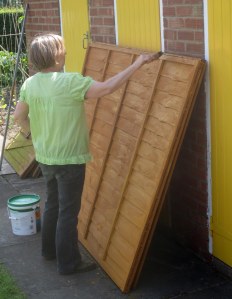 Mum painting fences for the elderly Japanese man next door

The Inland Revenue’s problem is part of a general problem with my life, in that I increasingly don’t exist in the UK. I don’t have a job, I don’t sign on, I don’t pay tax, I don’t pay national insurance, I don’t have a house, I don’t have a credit card, I don’t drive, I don’t give blood (anymore, due to travel history), I’m not registered with a doctor, I’m not registered with a dentist and I’m no longer registered to vote as I don’t really live anywhere. I have no debt and no assets. The government might be forgiven for thinking I’m trying to avoid them, or perhaps that I’m living in the woods stockpiling road kill and sharpening sticks for when the revolution comes.

I might not have a job, but I do have work; in fact slightly more than I have time to do. I’ve been asked to write up part of a site in Turkey I work at for the final publication, the only obstacles being that the area was excavated by someone else nearly ten years ago and I can’t read their handwriting. I’m largely relying on hazy memories of seeing the trench when I went over to borrow the excavator’s plumb bob one morning in 2004. I think there was a wall. In a further test of memory, I was contacted on Tuesday by another excavation asking if I remembered where I found a particular scrap of textile in Sudan in 2010. Errm…. 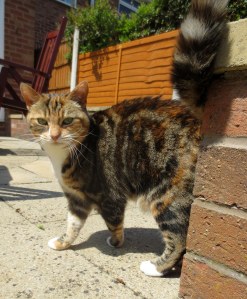 me and Tigerlilly own this block

I’m successfully distracting myself from these unfathomable questions by joining twitter and becoming drawn into the territorial wars of the neighbourhood cats. The big ginger four doors down is taking some shocking liberties with the garden furniture and might be in line for a surprise if I still have the reflexes.