I’m supposed to fly to Erbil in nine days’ time to continue excavating on the citadel which, all things considered, could have worked out better. The Foreign and Commonwealth office, as of yesterday, advises against all travel to most of Iraqi Kurdistan and the UK government has asked all British citizens to leave Erbil. That’s if I can get there at all seeing as most of the airlines that fly to Erbil are cancelling flights today. I now have to seriously consider the choice between bailing on the excavation, losing my airfare, two and a half months of pay and a certain amount of archaeological street-cred (trench-cred surely?) – we archaeologists traditionally laugh in the face of petty local deadly religious wars (see previous posts concerning Leonard Woolley) – or I could ignore the wise council of Her Majesty’s government and go out to Erbil to be butchered by angry jihadists. It’s all very difficult, on the one hand I really need the money, but on the other hand I don’t want to die and I do want to see the new series of Doctor Who. Seriously, I don’t know what to do.

[On an unprecedentedly serious note, watching a region I’ve come to like very much (in spite of its lunatic minority and poorly justified policy towards bacon) disintegrate into murderous chaos has been exceptionally painful. I’ve been deeply angry and frustrated over the short-sighted inaction of the international community over both the state of Israel’s murder of almost 2000 mostly innocent civilians in Gaza and the unchecked barbarity of ISIS/ISIL/IS in Iraq and Syria, all in the name of supposed just and merciful gods. Other than shouting at the television, my only response has been to give money to the Red Cross for Gaza and to the National Secular Society as mankind’s only long term hope.]

It’s been a bad summer, mostly spent on my parent’s sofa watching the World Cup, Wimbledon, the Tour de France, the cricket, the Commonwealth Games and the Horrible Wars. As well as making this my most physically inactive summer ever, it’s been extremely disappointing; I wanted England to win the World Cup (I know) and the cricket, Roger Federer to win Wimbledon, Chris Froome to win the Tour de France, the Palestinians to win in Gaza, the government to win in Ukraine and anyone but ISIS to win in Iraq. At least we did pretty well in the Commonwealth Games. 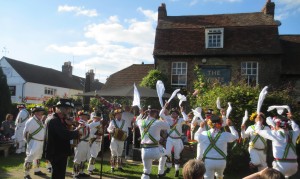 Drunk in a pub in Abingdon I experience considerable, if somewhat questionable, pleasure

I haven’t been doing much archaeology; I wrote a paper, did some reconstruction illustrations and a very boring desk based assessment for a site in Croydon. I read a vaguely archaeological book this week, written in the 1950s by a journalist travelling through the Middle East; ‘Flying to 3000 BC’ by Pierre Jeannerat. My heart sank during the introduction which was nauseatingly floral (‘The Great Pyramid is no mere bulk of freestone; it is also made of poetry’) but this soon settled down into more readable anecdotes about runaway donkeys and climbing pyramids in eveningwear after dinner parties. The coverage of the archaeology is rudimentary but it’s worth the read because Jeannerat meets some of the more famous archaeologists of the day. He gets shown around Nimrud by Max Mallowan and has lunch with Agatha Christie. He gets shouted at by Kathleen Kenyon from the bottom of her trench at Jericho. Disappointingly, Iraq is more or less skipped in favour of an extended dream sequence which involves Jeannerat reading a book from the distant future in which the world is wisely ruled over by elephants who are struggling to make sense of the archaeological remains of the barbarous human civilisation which preceded them. Going into details of the socio-religious structure of the future elephantine world and biographical details of the elephant author, professor Dermpacky, this sequence consumes around a fifth of the book and is mind-bogglingly pointless.

I find your lack of bacon disturbing

Outside archaeology I have amused myself by going to beer festivals and trying to adapt my sleep patterns so that my waking hours overlap as little as possible with those of my parents. My greatest triumph was going to my sister’s boyfriend’s Starwars/Game of Thrones themed birthday party as a Jedi direwolf.