In the way of all things, the end has come and I’ll be leaving Erbil tonight. I’m enjoying a last bit of crisp, sunny Kurdish autumn before I get a big wet smack in the face at Manchester, where heavy rain is forecast. On the excavation the last week was predictably annoying, as all things tend to be in Iraq when you find you have a deadline to plan for. I turned up on site on Sunday morning, bright and early, with a full five-day-week’s worth of work planned only to find that the site was crawling with soldiers and men in dark glasses peering down holes and looking under tarpaulins. The Kurdish prime minister was coming to visit, I was told, and there would be no work today as everyone was busy burying untidy cables and picking up rubbish in their best suits. Then I was told there would be no work the next day either, as it was the Shia holy day of Ashura and everyone would be busy fasting and beating themselves with chains. Oh, and Tuesday would probably be out too as everyone had to get through their Ashura come-down and make up for all the eating they’d missed. The last week of work had just shrunk from five days to two days so when I’d finished wailing and beating my little fists in the dust I sulked off home throwing foul looks at the men in dark glasses, who I think were sincerely glad I wasn’t hanging around to spoil the shiny suit aesthetic with my dirty trousers and grumpy face. 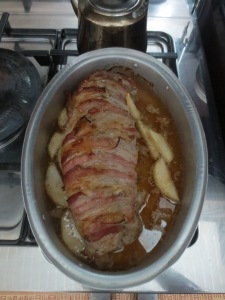 I spent my unexpected holiday digitising the site plan while listening to Radio One, both of which had negative effects on my mental health. On Ashura I made a pork feast for me and my housemate – I got two pork tenderloins, stuffed apple and cinnamon in between them and wrapped them together with apple smoked bacon. Then I cooked it in apple juice to create a porky masterpiece. I would like to call it pork Ashura if that wasn’t incredibly offensive. Other holiday activities included staring into space, watching my housemate’s dog crap in the corner (invariably as I eat breakfast) and making a late night ill-considered on-line purchase of expensive electrical goods.

Returning to site on Wednesday I abandoned my original five day plan and decided to make everything behind the city wall flat with a big pick and see what showed up. This in fact yielded rather too much and I ended my final day in an undignified frenzy of planning while the workmen sat around smoking and eating my goodbye biscuits. Then I went out and got drunk.

Today I’m faced with the weary prospect of packing my life up again, and cleaning the bathroom (the later being a trial that with my current situation I only have to endure once a year or so, thank christ).

ugh, packing. Just when I’d got everything tidy

The sickly pumpkins of Iraq

It’s the morning after an unwisely alcoholic Halloween and things have just got to the point where I think I might live after all. I went to a barbeque, where I got savaged by an enormous orange cat (small tiger?), and then onto the Halloween party at the Palmyra Hotel, and then I woke up. Earlier in the day I managed to procure an Iraqi pumpkin and carve a passably evil face into it. It is of a slightly sickly hue in comparison to its garish western equivalents and is much wetter, causing a brown slime to accumulate in the bottom and an appearance of sweating. It is in all other respects charming. 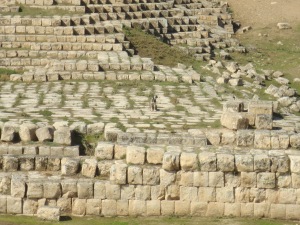 Iraq’s most annoying dog sitting on the aqueduct at Jerwan

This weekend is very much a contrast to last weekend which I spent in blameless sobriety, give or take a few glasses of wine here and there. Instead I went together with a few friends to hire a car and get out of Erbil. We decided to go up north of Mosul to see some of the Neo-Assyrian stuff, taking with us an elderly and inaccurate antiquities map to make sure we didn’t take a wrong turn and end the weekend by being sold into sexual slavery in the new Caliphate. As things turned out, what we really should have been worried about our own breath-taking stupidity in the area of car husbandry.

Our first stop was at Jerwan where the Assyrian king Sennacherib built a whopping great aqueduct in about 700BC to bring water to Nineveh and keep his slaves busy. The peacefulness of the place was somewhat spoiled by a large dog, which kept up a constant barking for the full forty minutes we were there, and by the rumble of Peshmerga artillery shelling IS positions to the south. We were joined by a local Peshmerga who was on leave, along with his sons and his tractor, which turned out to be fantastically lucky. After Jerwan we attempted to visit a small tell site but taking a wrong turn we drove right into a huge pool of mud and sheep excrement from which the Mazda was unwilling or unable to remove itself. Every attempt managed only to burrow it in deeper and throw huge sprays of brown slurry in all directions. In the end it settled contentedly in the deepest part like a fat black pig. Fortunately, we had just met a man with a tractor who we called and within half an hour we were watching sheepishly as he dragged the Mazda unwillingly out by its arse. I even forgave him for attempting to grope my breast back at Jerwan. The local children took us to their village to wash the car off and laugh at us. We went home via Khinis and Akre and several very narrowly avoided car accidents.

The king doing his king thing at Khinis

Out of gas: waiting to be rescued again

On the second day we headed for the ancient monastery at Mar Mattai northeast of Mosul. We were having a jolly old time until the Mazda mysteriously ceased to function. Having pushed the car out of the path of the death-dealing fuel tankers which were thundering around us, we consulted the Mazda’s manual and after a period of denial were forced to accept that we had in fact run out of petrol. Fortunately, Kurds like nothing better than rescuing mentally deficient foreigners from their own stupidity and soon enough a nice man had driven one of us off to buy fuel at the nearest petrol station and then helped us to funnel it into the car. We finally arrived at the monastery with just enough time to have a cup of tea with the head monk and sit through a church service with a lace doily on my head before it was time to get back in the car. So ended the many valuable lessons of last weekend.

Mar Mattai: Praying for a release from idiocy and a safe drive home