Final photography: L promises that she will catch me if I fall off the photography ladder balanced on top of the 2.5m section

After two days of solid plan drawing, intersected by a rather drunken party, I’m now held together by only my dwindling supply of acceptable instant coffee. My trenches have turned out to be really pretty nice in the end, featuring architecture you can walk through and use as planning tables. It’s always good in archaeology when something looks like what it is. The best looking feature is a pebble paved roadway running most of the length of the trench. My initial enthusiasm for the road has waned somewhat over the last few days due to a number of factors. Firstly, in defiance of Health and Safety directives, L and I abandoned our shoes a few weeks ago after the archaeology became a precious flower not to be trampled, and a pavement of sharp little stones, as it turns out, is not a friend to those who dig in their socks. The second source of my resentment towards the road is its concealment of a dead baby until the second to last day of excavation. The last thing I need when I’m running out of time is an infant smeared over a cobbled surface; it took half a day to get it cleaned and recorded and shoveled into a bucket.

Baby digging in my christmas socks

The final nail was naturally the back-breaking planning of hundreds of tiny stones. This was made more than usually challenging by the visual distortions produced by sleep deprivation causing the pebbles to sporadically dance about like excited puppies or engage in cellular mitosis. My ruler has also become suspiciously bendy and is occasionally numbered non-sequentially. All in all, I find great pleasure in the idea of taking a very large pick to the road next year. In the meantime L and I found some small satisfaction in smashing up a six thousand year old kiln, which I think might be the oldest standing structure I’ve so far destroyed.

During the week some excitement was caused by one of our drivers doing away with some more wildlife. He was sitting on the decrepit sofa outside the front door (much favoured by the goats) when he was bitten on the hand by a large black snake. He did what any sensible person would do and shot it with his revolver (which none of us knew he carried) and then proceeded to pummel it into the seat with the butt of the gun. He received minor first aid from N for the snake bite and a strong rebuke from Mohammed the cook for what he’d done to the sofa.

The Halabjah genocide: a true object of horror

On Thursday night I stayed up late and drank quite a lot of gin – L’s brothers had resupplied us with tonic water from Erbil in return for being allowed to sleep on the roof. On Friday morning, wearing my darkest sunglasses, we went to Halabjah to see the genocide memorial museum. This is my third season at this site and up until now Halabjah has figured only as a distant twinkling of lights on the hillside and as the nearest place from which it is possible to purchase (slightly over-priced) beer. The world knows Halabjah for other reasons; the worst ever chemical weapons attack directed against civilians was conducted here in 1988 by Saddam Hussein’s government. Up to 5,000 people died from a combination of mustard gas and nerve agents. After the town was retaken, the Iraqi army razed Halabjah to the ground with bulldozers and explosives.

The genocide memorial is an exceptionally ugly monument to an exceptionally ugly crime. Due to the destruction of the town, very few physical objects remain for the museum which is instead filled with the highly graphic photos taken by Iranian and international journalists in the days after the attack. Some of these are reconstructed in manikin dioramas, which are harrowing on several levels. People just dropped dead where they were, the animals died in the fields and birds fell dead from the sky. Many of the photographs showed children. Those with large families found it hardest to get out; they died together in heaps. When they hanged Saddam Hussein they sent a piece of the rope to Halabjah. 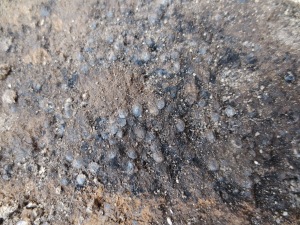 Lentil soup at the bottom of my trench

The week on site has been characterised by lentils. I’ve been digging out the first decent room fill we’ve found here; a good burnt one which all the specialists are disgustingly interested in, and the deeper I go the more lentily it gets. I’ve now reached a seam of almost pure, unadulterated lentils about a foot below the tops of the walls. In some ways it’s odd because there’s a similar lentil plague going on back at the house where we’ve now had lentil soup for lunch for six of the last seven days. This is beginning to seriously upset several team members’ state of mind, not to mention the state of the toilets. I began to wonder today whether I might have fallen into some sort of lentil-induced delirium and was self-generating lentils with the power of thought. Whether these are true lentils or just lentils of the mind, only the floatation residue results can tell. My current running hypothesis for this building is that someone burned down a Late Chalcolithic lentil soup shop; an act with which I entirely sympathise.

The sinister beings living in the house drains have finally been identified as Mole Crickets: https://www.youtube.com/watch?v=iwu3CDmFg00

I was awoken at five o’clock this morning by the merry sound of a mouse attempting to eat my mattress. Finding ourselves in a moment of mutual surprise, he proved the more fully conscious and vaulted my enormous pile of general mess to escape under the door of The Dungeon (this has a clearance at the bottom of several inches, presumably for the delivery of plates of porridge to inmates as well as to facilitate the passage of vermin). The remaining twenty minutes before my alarm went off were wasted in the detection of imaginary scratching noises in all corners of the room.

Work on site has been held up by several delays, chief among which is our entanglement with a two and a half metre long oven just below the plough zone, probably dating to the Uruk (4th Millennium BC). It’s turning out to be horribly deep and difficult, and today it spat out a complete bovine mandible in a final act of defiance. I sincerely cannot wait to smash it up with a hammer when this is all over. A more welcome and less time-consuming delay occurred at the end of last week involving mice. In a reversal of this morning’s incident, I rudely awoke a family of dormouse-like objects asleep in their own home by having one of my workmen cut a section through it, liberally distributing sleepy baby mice over trench G. Suppressing the workmen’s natural instinct to beat wildlife with shovels, L and I scooped up as many as we could find and put them in our pockets and then stored them in my hat for the rest of the day. Unsure of their future, we speculated about taking a couple back to the dig house to keep as pets (perhaps they could be trained to sort floatation heavy residue with their little hands?) but in the end we put them back in the hole in the section and the next day they were gone (optimistically retrieved by their mother, or less optimistically by a crow/cat/dog). I found that one of them had pissed in my hat. 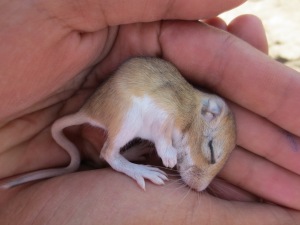 In other news we had a fairly brown-trouser-inducing thunderstorm, which we spent sitting on the patio drinking beer. Yesterday we went to Sulaimanyah for residency cards and essential shopping. We bought beer, tonic water for all the gin and a shisha pipe to smoke at the house. I bought ten cans of diet coke and a bar of soap. Everyone was very happy.