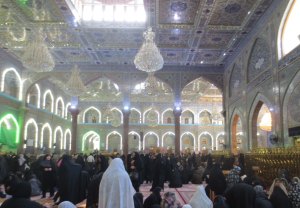 Abayas are very on-trend at the Imam Hussein mosque

My blogging activities have been seriously curtailed due to an internet drought at Ur over the past week. Hopefully I can now restore my flow of attention seeking drivel to previous levels. I’m reclining in my steel dragon, trying to digest another round of J’s bread and butter pudding. It’s been in the fridge for over two days now and has matured in unusual ways. There’s about 6lbs of it left, maybe more by now as it seems to be increasing in both mass and density. This is just one of the main events of the last week, which started with a difficult and heavily armed trip to visit the major Shia shrines at Karbala. This involved everyone getting very cross, and an unnecessary number of puns in very poor taste concerning the word Shiite. I also particularly enjoyed my first experience of wearing an abaya – one of those full-length black robes that cover everything but the face. Some of the best things about wearing an abaya are tripping on it going up stairs, tripping on it going down stairs, sitting on it so you can’t lean forward, standing on it when you want to get up, not being able to reach for things more than a foot away, getting caught on furniture, knocking drinks over with the sleeves, continual readjustment, being too hot and being told off for not wearing it correctly. F got told off for smoking in hers. I excelled myself by falling asleep during our meeting with the head imam. 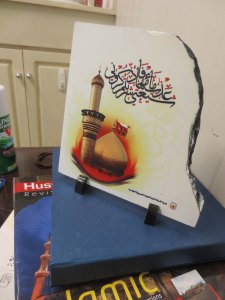 The nice men at the shrine gave me this commemorative plaque, a flag and some islamic instructional literature. And a real kitkat, which was much appreciated 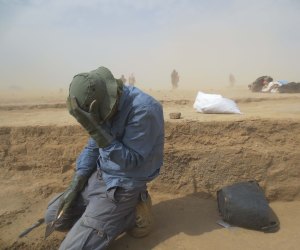 On site things have also been trying. A few days ago I started finding cuneiform tablets in the main room I’m excavating, meaning that everything has slowed to almost a standstill. The tablets, which are made of unbaked mud, are lurking about in a layer of dense mud brick rubble; this makes it extremely hard to sort the boring, useless, everyday lumps of mud which need to go to the spoil heap to die from the fantastically interesting, extremely important lumps of mud which need to go to the museum to be studied. There are several difficult skills to be honed, such as not finding tablets by cutting them in half with a trowel, not spending too long painstakingly excavating alluringly shaped pieces of brick, and not screaming and throwing your tools across the trench in frustration more than once a day. I hope there’s something interesting written on them and not tax returns or a teenage diary. 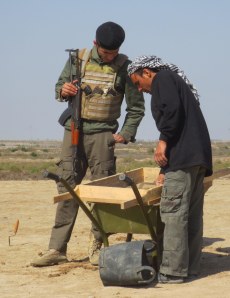 Sieving under pressure: the distinctly military flavour of digging in Iraq

In the evening we’ve taken to watching Generation Kill which follows a group of US marines through the American invasion in 2003. In last night’s episode the marines rolled through Nasiriyah, which was a bit weird as it’s only ten minutes down the road. Life on the excavation now incorporates a regrettable amount of military jargon and more than the previous amount of colourful swearing. I found a sticker on the armchair in my steel dragon saying ‘property of the US government’. 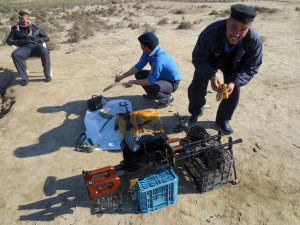 Thursday afternoon: The police polish their guns ready for a big weekend

Peace reigns at the Ur dig house. It is Thursday afternoon, the day off ahead of us and the power is already out. I can hear the merry, distant sounds of my colleagues trying to play ping pong on the dining room table. In the last week we have been joined by a new team member (N), who, other than the fact that he didn’t make full use of his customs allowance of alcohol, seems to be a perfectly reasonable human man (which has now been verified by his Iraqi health checks).  I spent the last two days digging up what appears to be an Early Dynastic vaulted tomb, amid wild speculation about gold and princesses, only to discover this afternoon that it’s completely empty. I took it fairly philosophically; you have to take the rough with the smooth in the grave digging line. Anyway, everything seemed better back at the house after a cup of tea and a Cornetto. 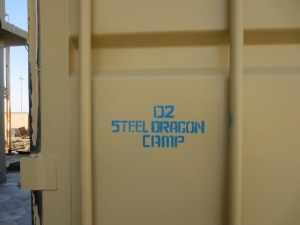 We have inherited the four survivors of Steel Dragon Camp D2.

My biggest news of the week is that I finally escaped the doleful presence of my humourless, dirt-bothering roommate (who is a good person, on paper) and moved into a steel dragon. We have four steel dragons in the yard behind the house. They’re essentially those metal shipping containers that skulk about on cargo ships, roughly adapted for habitation by, I suspect, the military. Our steel dragons have certainly seen service, possibly in the Crimea. I inherited mine from one of the co-directors who had to return to the UK to his teaching post, leaving a half built floatation machine in the garden and half of his beard in my sink. After some fairly half-hearted housework it is now mostly de-professored. 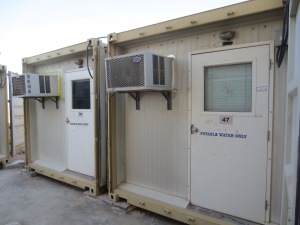 Hut 47: my own dear dragon. Hut 39 next door is the escape committee.

There’s something of an art to living in a steel box with all the insulating properties of a coke can. The cold weather persists, making the dragon much like one of those walk-in meat freezers. F claims to have recorded 3˚C one morning in dragon 72. The solution, other than wearing eight layers of clothes and a hat, comes in the form of a huge dust-filled AC unit strapped to the front of the container, which when activated makes a brain-rattling thrumming noise and causes enough vibration to make my tin trunk creep across the floor. All in all, it’s a lot like being in a helicopter at high altitude. I suspect once the hot weather comes around it’ll be like being a dog locked in a hot car. Freedom always comes with a price. 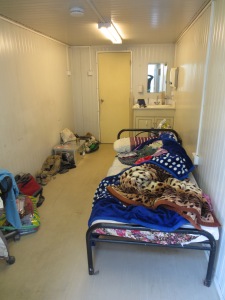 In the belly of the beast: you can never have too many polyester leopard print blankets in a steel dragon, so long as you can handle the static. 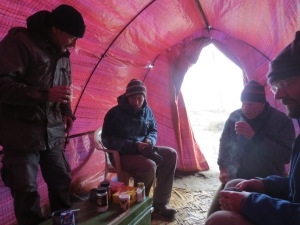 I woke up at 4:30am this morning freezing. I cast about for any extra clothing in reach but found only a microfiber travel towel, which I wrapped round my knees. The temperature at Ur has gone down ten degrees in the last two days which has made everyone very unhappy, especially those of us who are living in metal boxes in the garden. I made a critical decision ten minutes before leaving the house to put a pair of skinny jeans on under my site trousers. This may have saved my life. Two pairs of trousers was indeed the order of the day all round, though I still had a fair amount of trouble with the touchscreen on my Toughbook due to the unintentional double click effect of shivering. There was also the issue of dripping snot onto the keyboard. I thought at one point that my smallest workman Ali (who claims to be fifteen but can’t be more than eleven) might die. 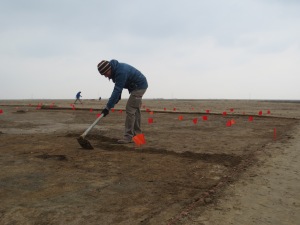 S tends his flag garden; the harvest will be good this year 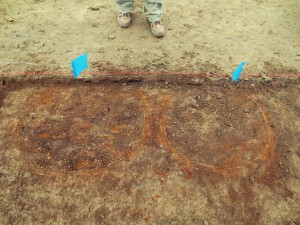 On site the average mental age is about fourteen

The site is shaping up nicely, if you like sites to be Old Babylonian temple shaped, which I do. It’s still looking a bit two dimensional as we’ve done a lot of surface clearance to get the main walls, but we’ll be heading down as soon as we can all agree on a sampling strategy (or hell freezes over, which looks more likely). It’s all quite colourful as the surface erosion has cut holes through layers of plaster floors and burnt fills producing concentric bands of grey and white and red with lumps of pottery, making it look as if someone has been spectacularly sick in the trench. F has found a pair of bread ovens that look like breasts. 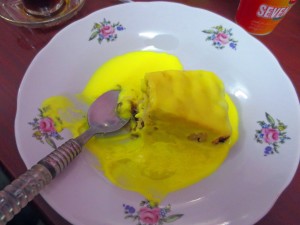 Iraqi orange flavour custard has a half life of 10,000 years

I returned to the house after work to find that my roommate, whom I live to vex, had finally cracked and tidied up my stuff. Instead of the mound of mixed clothes, electricals and snack foods I’d been carefully curating at the foot of my bed, I found my clothes folded and stacked on top of my bag, and my shirts, which have never known such things, on clothes hangers on the back of the door. My clean and dirty underwear bags had been hung on the bed post and all my cosmetics hidden behind the curtains. Everything had been swept. I kicked my dirty boots off into the corner and slouched off to think up more elaborate ways to be filthy. For dinner one of the dig directors made cake served with florescent yellow custard which tasted like Fanta.