Whats that K? Individual 1026 has shortly onset? was sleep covered? There are warbirds decloaking off the starboard bow? What ?!?

Wimbledon’s over, we’re between ashes tests, and Sharpe’s Battle is stuck in the post, so what is there to live for? The Tour de France is okay I suppose, if you like men who look a bit like insects, but watching Chris Froome’s withered little arms clinging to his handlebars isn’t the best accompaniment to a happy buttery lunch. What else am I supposed to stare at with my mouth open while jabbing listlessly at my laptop keyboard with a single index finger?

I’m not making brilliant progress with my summer desk work but it’s not all my fault, I’ve spent the last week writing a description of each of the burials excavated at my part of the Egyptian cemetery in the spring and each burial description requires me to cross-reference half a dozen forms, some of which have been written by one of my site assistants, in 6H pencil, in Klingon (you know who you are, K; at least your photos were alright). My parents are not helping. While I’m trying to work my mum sits down next to me and starts telling me about her friend’s daughter’s boyfriend’s trouble with his sister’s friend’s dogs, or worse, about my brother’s children who won’t do anything genuinely interesting for at least another twenty years if ever. I’ve tried to block out the long pointless arguments conducted from opposite ends of the house by using my last pair of earplugs and wrapping a thick scarf round my head but it doesn’t even take the edge off. I’ve tried sticking a note on my forehead pointing out that I’m at work now, but it’s just an invitation for my mum to start a conversation about ‘how it’s going’. 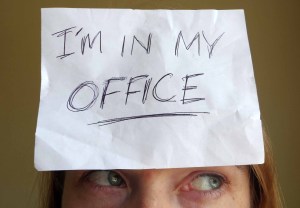 Trying to set boundaries for my parents

This is of course the problem of the freelancer working from home and living with others. That and the problems of being lazy and easily distracted. The other major problem of the freelancer is cash flow. I haven’t been paid now since March and when I last checked I had £29 in the bank. It’s not that I haven’t been working, just that people have been very slow in paying. I finally got my cheque for the Egyptian dig after waiting eight weeks for it; I took it to the bank last Thursday, but apparently it can take up to two weeks to process “funny foreign cheques from funny foreign banks” and so I wait. It’s now been over a month since Museum of London Archaeology said that the cheque for the job I did in Crewe would go “straight in the post”, and after many emails the British Museum has told me I can expect my expense claim from that interview disaster in January to go into my account on 20th of July. “Oh good” I replied, “that’ll be the six month anniversary of the train ride I’m claiming for”, but it’s hard to convey the appropriate degree of sarcasm in the email format.

I care not for tawdry money of course, the soul can be rich in the depths of worldly poverty, but it’s embarrassing to ask my dad if I can borrow a tenner when I want to go to the pub. And I have holes in all my socks. 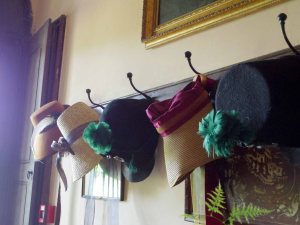 The hat rack of delusions 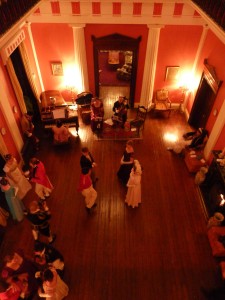 Balling in the ballroom

It’s out of season for Middle Eastern excavation so I’m having to make my own fun. I’m about to buy Sharpe’s Trafalgar in the Kindle store which, I have high hopes, will bring together many of my life’s dirty little pleasures – heroic men in well-fitting uniforms, slightly shoddy literature and Admiral Lord Horatio Nelson. This will be the seventh Sharpe novel I’ve read this week in an attempt to stave off the ravages of the real world. I’ve decided that the tawdry and emasculated land of now is not for me and I’m going to form square and repel reality with as many volleys as it takes (aim for the horses lads). 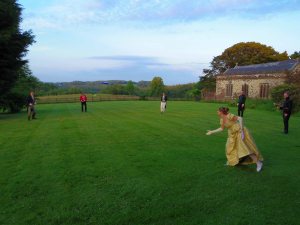 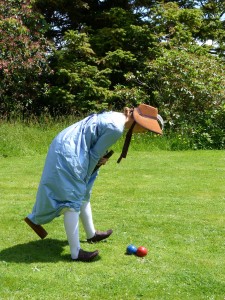 It’s been nearly two weeks since the end of the week-long house party my sister and me organised for the 200th anniversary of the battle of Waterloo, which isn’t even the stupidest thing we’ve ever done. The problem has been the existential hangover, in which I’m struggling to come to terms with hard truths, such as no longer being able to drink my claret on the croquet lawn or ask one of the officers to row me around the boating lake. Why don’t I have a ballroom to hold my balls in? I can’t fit a full sized snooker table into any of the rooms in my parents’ three bedroom semi, and the neighbours stare at me through the front windows when I wear Napoleon’s hat (they’re doing it right now). I think one of them was looking at me from behind their curtains when I was practicing my musket drill in the back garden last night (how else am I going to get up to three rounds a minute?) 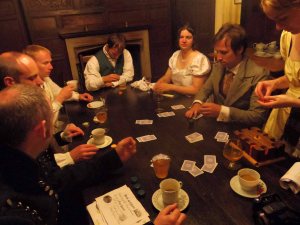 I triumph in the post-ball all-night poker

I’m also frustrated that I can no longer resolve simple disagreements by shooting the other person in the head at dawn. I’ve tried demanding satisfaction, but the man who poured me the wrong sort of beer in the pub last week entirely misunderstood me. In the meantime, I can feel my precarious grasp of time, place and appropriate clothing fading away like the paintball bruises on my thighs and abdomen. Why cannot life be always cake and dancing? At least I can still drink all day. 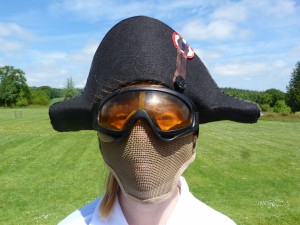 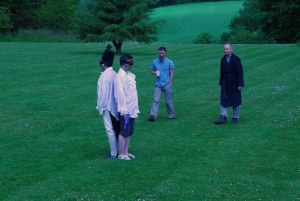 Really I should be working – I haven’t been paid since January and I’ve got a monstrous pile of desk work lined up for the summer, but it’s difficult to balance it with the demands of being mental and reading 1.5 Bernard Cornwell novels a day. I’m trying to resist the urge to buy another sword.

I effectively went on holiday to 1815 and refused to come home. Sorry, I am currently out of the office; I have gone to my happy place to fight the French.

Does anyone know how to get port out of a silk dress?

Waterloo dinner, drinking a health to the duke and confusion to Bonaparte