Ah January, lovely January; land of fatness and poverty and self-recrimination about another year wasted. Lo! See the rolling hills of thwarted plans, take a stroll along the shingle beach of advancing age, peer over the jagged cliff of approaching sobriety. The world certainly looks like a bleaker place now that I’m not allowed to drink a bottle of wine a day. I’ll be beginning to reverse my post-Christmas alcohol dependency by flying to Basra on Thursday where I’ll be able to enjoy three uninterrupted months of booze withdrawal back on the excavation near Ur. It feels a bit daunting right now and the next sanctimonious arse who tells me they’re doing Dry January is risking a punch in the mouth.

The current state of my packing for Iraq. I definitely need more pain killers, but I’m probably okay for cupasoups

It’s been a wet weary winter since I got back from Erbil, which only slightly excuses my neglect of blog-writing duties. A major factor has been another protracted job-seeking tragedy with the British Museum, which seems to be becoming an awful annual fixture. I made it to the interview on time, which represents progress, and I even managed to string some words together in the right language and the right order but they gave it to someone else all the same. A Frenchman, as if it wasn’t bad enough already. On the one hand I railed against an unjust universe and the pointlessness of it all, and on the other hand I was relieved that I still don’t have to grow up and take some responsibility. 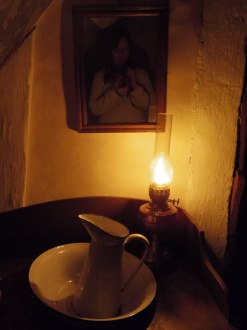 I take an oil lamp up to the attic so I can have a wash in my cold jug of water. Happy New Year!

Although I haven’t done any archaeology since Erbil (unless you count the mind-buggeringly boring plan digitisation I’m doing for the British Museum) I did try my hand at a little living history over the New Year. I concocted a last minute plan to escape from Crewe and rent a house in Shropshire with a few people and a dog for five days, and I thought it would be funny if it was the house from Victorian Farm which doesn’t have any gas, electricity or running water. What larks! Living like a Victorian involves dark narrow spaces and lots and lots of fire, which is the perfect environment for drinking heavily over the New Year period (what else to do during the three hours it takes for the range to get hot enough to make tea?). We spent our time playing board games, heaving coal, talking shite, fetching water, reading ghost stories in funny voices, making stew, singing and burning ourselves on everything. All my clothes smell of paraffin, it was the best New Year ever.

My next post will be from Iraq and might involve some proper archaeology if I can remember what that is. 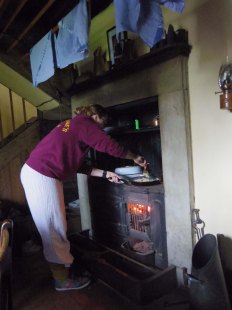 In the cold Victorian light of morning, A- cooks bacon and eggs on the range