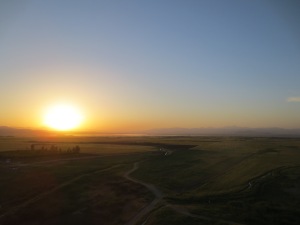 I was awoken at five o’clock this morning by the merry sound of a mouse attempting to eat my mattress. Finding ourselves in a moment of mutual surprise, he proved the more fully conscious and vaulted my enormous pile of general mess to escape under the door of The Dungeon (this has a clearance at the bottom of several inches, presumably for the delivery of plates of porridge to inmates as well as to facilitate the passage of vermin). The remaining twenty minutes before my alarm went off were wasted in the detection of imaginary scratching noises in all corners of the room. 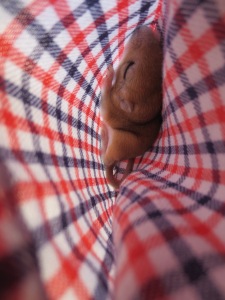 Work on site has been held up by several delays, chief among which is our entanglement with a two and a half metre long oven just below the plough zone, probably dating to the Uruk (4th Millennium BC). It’s turning out to be horribly deep and difficult, and today it spat out a complete bovine mandible in a final act of defiance. I sincerely cannot wait to smash it up with a hammer when this is all over. A more welcome and less time-consuming delay occurred at the end of last week involving mice. In a reversal of this morning’s incident, I rudely awoke a family of dormouse-like objects asleep in their own home by having one of my workmen cut a section through it, liberally distributing sleepy baby mice over trench G. Suppressing the workmen’s natural instinct to beat wildlife with shovels, L and I scooped up as many as we could find and put them in our pockets and then stored them in my hat for the rest of the day. Unsure of their future, we speculated about taking a couple back to the dig house to keep as pets (perhaps they could be trained to sort floatation heavy residue with their little hands?) but in the end we put them back in the hole in the section and the next day they were gone (optimistically retrieved by their mother, or less optimistically by a crow/cat/dog). I found that one of them had pissed in my hat.

In other news we had a fairly brown-trouser-inducing thunderstorm, which we spent sitting on the patio drinking beer. Yesterday we went to Sulaimanyah for residency cards and essential shopping. We bought beer, tonic water for all the gin and a shisha pipe to smoke at the house. I bought ten cans of diet coke and a bar of soap. Everyone was very happy.