I made a bat friend

As the work I was supposed to have been doing in southern Iraq since Christmas has unsurprisingly failed to happen (security issues, who’d have thought?), leaving me stuck in rural England living with my parents, I thought I’d share a little of this awful misery. It’s a hard life; keeping the cat company, trying to decide what to have for lunch day after day, helping my dad watch the darts. When it snowed I made Batman in the back garden. It’s frankly exhausting being bored out of my tiny mind (actually my head is unusually large and I can only wear men’s hats). I’ve been using some of my short precious life to catch up with books I’d bought but hadn’t thought were worth reading, and as my blog is at least superficially about archaeology, I thought I might review some of the more archaeologically relevant ones.

The three I’ve singled out for abuse are “The Tower of Babel” (1955) by André Parrot, “Walls of Jericho” (1958) by Margaret Wheeler, and “Ten Years’ Captivity in the Mahdi’s Camp” (1893) by Major-General Sir F. R. Wingate, R.A., K.C.B., K.C.M.G., D.S.O., A.D.C., &c., &c. based on the original manuscripts of Father Joseph Ohrwalder. All three concern regions I work in and involve history and archaeology, and more importantly have nicely complementary cover colours.

I mostly judge by covers

The Tower of Babel is about ziggurats and is written by the famous French archaeologist André Parrot, who I encountered (in print of course; I believe he’s good and dead) during my PhD. Never one to let the facts get in the way of his imagination, I came to appreciate Parrot as a bit of research light relief in the best traditions of French academia. This book is no exception and possibly represents his best work of fiction. In addition to his usual disregard for the limits of the data, he starts with the common mistake of assuming that Near Eastern archaeology is primarily for clearing up exactly what god was banging on about in the bible (a mistake which is by no means restricted to the past http://m.theatlantic.com/international/archive/2013/02/the-biblical-pseudo-archeologists-pillaging-the-west-bank/273488/). There’s nothing like biblical archaeology for making real archaeologists feel ill.

Parrot’s book is full of delicious phrases designed to make Anglo-Saxons smile, and for this alone was worth the time and effort:

“For it is my chief and constant aim to go beyond the appearances, the tangible forms, and seek out the very soul of these buried peoples. That Tower raised in the middle of the plain of Shinar is the focus of the anxious longing of all humanity to pierce the mystery of its destiny.” p.11

The most interesting question raised by the book is why did André Parrot spend such a lot of his life gathering a vast amount of excellent fieldwork data if he was just going to go home to Paris and make it all up anyway. The book was considerably improved by being very short. 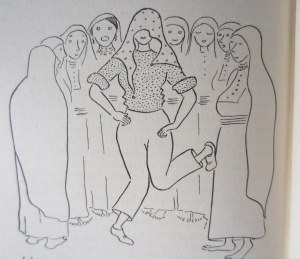 Margaret Wheeler’s Walls of Jericho is a far more down to earth offering, although it remains sufficiently bible-heavy to be distressing to those of us who consider the Old Testament to be just one more unreliable textual source. Ignoring the frequent musings on what Joshua might have seen from here and why the walls might have fallen down, Wheeler has written an otherwise fairly engaging account of the excavations at Jericho. Almost uniquely for the 1950s, she even manages to talk at length about the local population without being too racist or unbearably patronising, although she does slightly overuse the word ‘marvellous’. Wheeler is sometimes deliberately funny, and has some good anecdotes about people getting electrocuted, as well as some strong opinions on the growing of facial hair which endear her to me. The undoubted highlights, however, are her illustrations which are technically dreadful and don’t feature enough noses for the number of people, but make the book go faster. 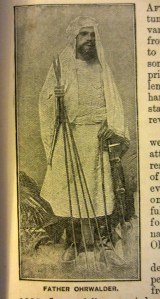 Father Ohrwalder, struggling not to shit himself to death

Ten Years’ Captivity in the Mahdi’s Camp is by far and away the best read, and despite being written in the nineteenth century by an Austrian missionary has almost nothing to say about the bible. During my work in the Sudan I became pretty interested in the Mahdist uprising (although with an unhealthily obsessive focus on General Gordon http://noonobservation.com/2012/08/22/flash-gordon/). In 1881 the Mahdi led a religiously fanatical revolt in the Sudan against the Anglo-Egyptian government, which in the short term led to a lot of people being impaled on spears, starving to death in a famine or being made unhappy in a wide range of other ways. This book tells the instructive story of Father Ohrwalder who was captured by the Mahdists at the start of the uprising and then spent ten years trying not to get beheaded, while surviving on stoicism and by eating the lice in his clothes. There are some amusing anecdotes, most of which end with someone having their head cut off and stuck on a spear, or concern Father Ohrwalder’s vain attempts to prevent his nuns from being raped. There’s action, intrigue, danger and an awful lot of dysentery. I have the 1903 edition which also has excellent illustrations, plates and a pull out map of the centre of Omdurman. There’s even a happy ending in which the Father and his two remaining nuns escape across the desert on camels. They don’t write books like this any.more, I highly recommend it.