As a thank you at the end of the season, our Iraqi colleagues generously treated us to dinner tonight. Last night they brought dinner round to the dig house so we could be introduced first. Alerted by the sound of strident bleating, we came outside to find the house keeper holding a pretty black and white lamb by its fluffy newly washed fleece. It was a somewhat strained social atmosphere; the lamb was clearly unhappy about the turn events had taken, and we were all very hungry as it was just before dinner. We tried to say the right manner of things, about what a nice sort of lamb he was, but it doesn’t do to get overly familiar in this kind of short term relationship. We all resisted any impulses towards patting it or naming it. The poor little chap rather embarrassed himself in the end by shitting all over the garden path, but under the circumstances we agreed that he could be forgiven.

It should be noted that his pitiful crying and big sad eyes in no way prevented him from being delicious. 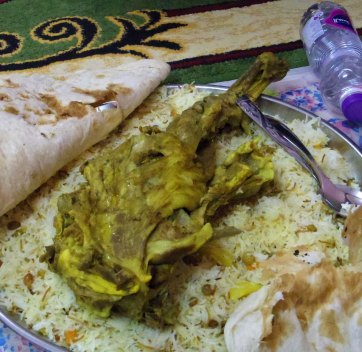 Things in southern Iraq are progressing in their usual manner. After six weeks of freezing our extremities off, the weather was very nice for about fifteen minutes on Monday before going stinking hot and horribly windy instead. Last week I finally managed to evict all the dead people from my excavation area; a glum, chain-smoking man from the mosque came and took away the unwelcome late intrusive adult cut into my floors and hastily reburied him/her in a shallow grave behind the spoil heap. Almost immediately afterwards I disturbed an inconvenient baby in a mudbrick debris deposit, which I cleaned, photographed, planned and removed in less than half an hour – a new personal best. My courtyard also yielded a large stone basin, which was removed back to the dig house at Ur where it has proved to be ideal for stopping our football from blowing away in these windier times. The smokers among us lament that it would have made the perfect statement ashtray for the garden if only we didn’t have to send it to the museum so they can lose it.

Last weekend we had a team outing to a site called Shmet, which it turned out no one really knew how to get to. We and our police detail spent an hour and a half driving around the same square kilometer of beige asking shepherds for directions and trying to circumvent a freshly excavated gas pipeline ditch. The site was pretty impressive when we finally got there, having been badly excavated by Iraqi archaeologists and badly looted by Iraqi villagers. After re-enacting several key scenes from the film Labyrinth, me and F went off to find some privacy. Fortunately, a colleague overheard one of our Iraqi police escort say he was going to climb higher up the mound as he couldn’t see two of the foreign women. She curbed his diligence by explaining that after four hours in the minibus we had in fact gone to find a looting pit deep enough to piss in.

Through dangers untold and hardships unnumbered, I have fought my way here to the castle beyond the goblin city