Just a short post as very very very little has happened recently; I’ve been truly, deeply bored and I don’t want to spread it to the general population. At least ebola victims have to worry about passing on their bodily fluids, which sounds like exactly the sort of excitement the summer’s been missing. I’ve spent a lot of time lying on the sofa feeding my dinosaurs on Jurassic Park Builder, eating yoghurt with a big spoon and shouting at Judge Rinder (the new UK version of Judge Judy which has provided the first viable 2pm alternative to Doctors). I’ve also fallen back in love with Star Trek the next generation which is on CBS Action at 11am, giving me something to set the alarm for.

Last time I posted I was wrestling with the decision of whether or not to go and excavate in Erbil with ISIS at the gates. I eventually decided I needed the money more than I was worried about being beheaded by fruitcakes and to go out as planned. I was halfway through packing when the director of the citadel decided to delay my arrival for four weeks. I was initially pleased that he was responsible and concerned for my safety as a lone foreign woman flying into a war zone, but later discovered that the budget hadn’t arrived and he didn’t have the money to pay me. 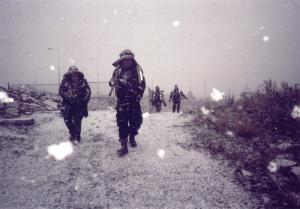 When the world was young, my first archaeology job was digging up pottery factories in Stoke-on-Trent. This is the only photo I have of these times, and this is just how I remember it; a bit like a Soviet gulag

Other than writing another postdoc application for future rejection, the only archaeology I’ve been up to has been the sort you do on a computer rather than the good sort. People in archaeology go on about GIS (Geographic Information Systems) as if it’s some sort of magic practiced by archaeo-wizards who can use it to answer any question. Anything. So wishing to learn this deep magic I paid £117 to be taught GIS for archaeologists by Staffordshire University in Stoke-on-Trent. It turns out that GIS isn’t magic, it’s just a computer package for drawing maps with an unusually poor user interface. It was a weary day. It was also an illustration of one of those uncomfortable divisions in archaeology. While I was waiting for the course to start in the morning I was chatting over coffee with the other twenty-odd people who were there for the two courses running. When the two course leaders came to collect us, all the women went off to the forensic archaeology course, on which there was not one man (I blame Silent Witness and Bones), and all the men came with me to the GIS course on which I was the only woman. Why why why? Women of archaeology! There is nothing to be afraid of, we can survey too. And men, Osteoarchaeology needs your manly attentions, and being a conservator doesn’t necessarily make you gay; you can like gluing things together and women.

I’m finally off to Iraq on Sunday, it’ll be great to get away from the Scottish referendum coverage.