Work in my area of the cemetery is acquiring a distinctly tragic aura as the season goes on. I’m currently excavating yet another multiple burial, this time containing two adolescents and a toddler; the last one had two young adults and a baby, and the one before was a woman and a new-born. “This is family?” asked our Egyptian inspector today, constituting her first ever insightful question (yesterday’s question was ‘what is a pottery?’, which was a bit too existential for my unorthodox grasp of Arabic to cover in the fullest sense). Indeed, is my pit-full-of-children the product of a single awful family tragedy? Well, personally I chose not to think about that sort of thing because it brings me down. I’ve instituted accent day at the Upper Site to keep things light; today we did Yorkshire (is tha’ a bairn in’t pit lass?), tomorrow we’re doing ridiculous French. Life goes on. 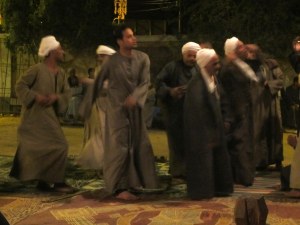 On the night of Margaret Thatchers death, the men of the village dance

We have our own family ties at the excavation and last night we were invited to a party at the house of our driver; his father having been our driver before him. We took the precaution of strategic gin drinking before the event, so we were all properly disposed to entertain with our outrageous foreignness and willingness to hold people’s children and take photographs of strangers. There was a power cut during dinner, forcing us to eat our Nile fish in the dark, which, all Nilotic factors considered, is almost certainly the best way. I enjoyed the sufi dancing, even though the band’s sound system seemed to be vibrating the teeth out of my head. ‘Larger, brighter, louder’ is the cultural mantra of rural Egypt. 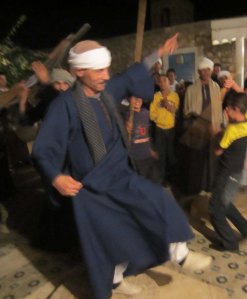 The hop-step-point familiar from Morris dancing

I had a dream last night that I was lying in my grave and someone was trying to bash my head in with the butt of a levelling rod. Then I woke up with the most appalling hangover. We had a bit of a party here at the dig house last night for a special anniversary and some of us got a little carried away. Or in fact, literally carried away.

We had a famous band down from Cairo for some traditional dance music. They used to play for President Mubarak when that was an acceptable thing to do, but now they’re reduced to playing in the middle of nowhere for drunk archaeologists. Vive la revolution. We also invited our workmen, and a fearsome number of antiquities inspectors invited themselves, forcing me to consume most of my alcohol covertly in the office.

And then there was the dancing; oh dear. I have a powerful memory of dancing the Egyptian stick dance using a ranging rod from the equipment store while wearing a cardboard Nefertiti hat. My grace and elegance, honed through careful practice on the floors of low-end clubs and my six month experiment with morris dancing, was of course captured for posterity on the mobile phones of numerous Egyptian men. I’m sure a productive day was spent in the village swapping files and laughing.

Pimp my dervish: dancing at the next level

In consequence, I’ve spent today on a diet of water, ibuprofen and shame. I’ve watched a lot of DVDs and done a fair amount of shaking, punctuated by ignominiously vomiting out of the living room window half way through Howl’s Moving Castle.

I’ve learned several things in the last twenty-four hours: 1) all traditional Egyptian tunes sound exactly the same, 2) foreign women trying to dance is a class of saleable pornography here, 3) gin – there are attainable limits, 4) Egyptian sparkling wine is not fit for human consumption.

I am going back to bed, it seems I may live after all.