I’ve always suspected that a vast quantity of suffering in the world can be put down to good intentions allied with dreadful forward planning. Yesterday was a fine illustration. We went to stay in Suliemaniya for the weekend, partly so we could stock up on gin and kitkats, and partially because we wanted to go to see a famous ancient rock relief in the mountains. Part one went fine (except of course, that I drank too much) then we got on a bus and drove round and round in the Zagros foothills for two hours while the driver asked a series of confused strangers where this thing the foreigners want to see is. Eventually he deposited us at the end of a dirt track and set about investigating why the bus had started to produce a high pitched wailing noise when it went round corners.

After ten minutes walking, it was discovered that no one in fact had the faintest idea where this thing was. We called the museum who advised us to follow the iron water pipe up the valley so this is what we did. Over an hour later I slumped to the ground in a small swamp crawling with ticks and mosquitoes and declared my ever-lasting disinterest in ancient rock reliefs. I watched the poor stragglers crawling the last few yards to the top of the mountain, drenched in sweat, weeping, scratched and bitten. As most of us thought we were getting out of the bus for ten minutes to look at a pretty picture, it hadn’t occurred to bring proper shoes, or water. As I began to drag my sleep-deprived, hung-over and desiccated remains back down the mountain, I faintly recalled saying that my main aim for the weekend was to be less tired after it than I was before. 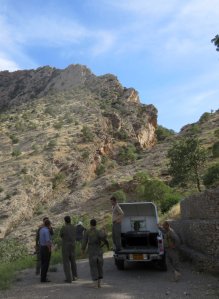 The Iraqi army, marvelling at the ineptitude of foreign archaeologists

I arrived back at the bus to find that our driver had informed the Iraqi army of our failure to return and a jeep full of soldiers were waiting to see if they’d have to start a search and rescue mission. We begged half a cup of water from their officer, who looked on us with great pity for our physical exhaustion and grave mental deficiencies. The rock relief was of course just ten minutes down the track but none of us had thought to look up. 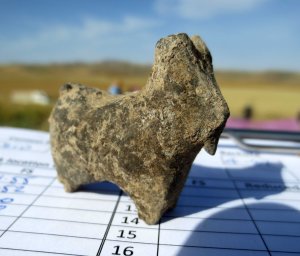 Excavation is winding down now for the end of the season. I finished digging today by finding a nice goat figurine complete with a little beard. This is by far our most attractive find, the only other figurines being a remarkably ugly woman(?) and the rear end of a horse. My personal favourite find however is the set of nesting bevel-rimmed bowls I got out of Trench F. BRBs are noted for their regularity in size, about which many books and papers have been written in the past – were they for a standardised grain ration? Perhaps they were army issue bread moulds? – in the context of which I consider my collection to be the best joke I’ve heard in ages.

I just hauled four big sacks and five crates of pottery back to the dig house from one of my trenches. I dumped them in the office and left for lunch before the registrar could start crying properly. The vast majority of the stuff is made up of bevel-rimmed bowls (or BRBs, for those who are sick to death of them) – a type of pot found in Iraq from the Uruk period, which has nothing to do with those really mean orcs from Lord of the Rings (alas). Bevel-rimmed bowls are very ugly and badly made, unlike the preceding Halaf period pretty pretty girly painted pottery, which G. finds over at the other site and flashes about like bonbons.

I actually consider the crappiness of bevel-rimmed bowls as a flower of hope in the desert of the prehistoric; it represents the point when people found out that there were better things to do with their time than sit around painting their tableware. I know it floats some people’s boats but the prehistoric was clearly very dull; all people were doing was subsistence farming, bit of hunting, building very small, very boring houses and making up religions that never caught on. Conversation must have been turgid throughout the late Neolithic, and people probably turned to painting pottery because it was that or discussing the right way to knap flint for the eight-hundredth time.

Then the Uruk period comes along, people invent cities, writing, beer and discos, and suddenly everyone wants pots you can hand round at a party and leave out for the bin men with the other empties. Life becomes less about how fine you can make the cross hatching on your tea cup and more about shopping and going to the pub, which is my definition of civilisation.

Archaeological rants aside, by the end of the day I’ll be roundly hating bevel-rimmed bowls and all they stand for, and everyone else on the team is going to be hating me for digging them up. It’s going to take at least three hours and a lot of ill-feeling to get it washed. Thankfully, I curried favour with the registrar yesterday by shaking enough Egyptian sand out of my pencil case to nestle a find in for drawing, otherwise I’d be keeping my back to the wall and preparing my own meals.

In other news, the dig director has stolen the chair from my room, which means he’s also seen The Mess…