A fictional sub-blog describing things that never were, people who are not real and events which did not happen

C is gone, an SUV came on Thursday and took him to the airport (we hope). The driver wasn’t one of the usual ones; he wore a polo shirt and army boots. Our employers said C had to go back to his university for the start of term, but he hadn’t mentioned anything to us. And he had posted some photos of the project on Facebook… We joke that C is back in Germany enjoying a beer while we’re still slaving away on the excavation, it’s comforting to think that might be true. 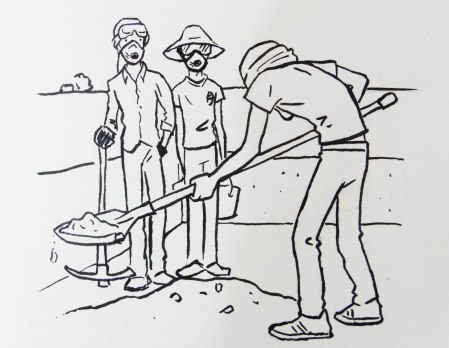 The local youth, fully equipped for the nuclear apocalypse

There’s an unusual amount of health and safety gear on this dig. The workmen are all given thick rubber gloves, face masks and goggles and, unusually, they all seem very keen to wear them. Normally Iraqi workmen quickly discard safety gear as too hot and annoying to be bothered with but the young men from the local town who move the spoil are careful to check they are fully protected before they handle the earth. The foreman saw me moving rocks today without gloves, he took me aside and told me I must always wear them here; “Doctora” he said, “it is very dangerous for you”.

The site remains confusing, my trenches are almost sterile in terms of cultural material. Today all we found between the bare stone walls in seven hours of work was one iron nail, an eviscerated mouse corpse (mummified) and a medium sized scorpion. The latter was carefully captured alive by the workmen, placed on a large, flat stone, and then solemnly put to death using the big pick.

I write this blog post in darkest secrecy while the others are out. I don’t want to go ‘to the airport’.