In the deepest part of the deepest trench, fortification wall Phase 1a (Neo-Assyrian?) continues on down

I got paid today with the usual stack of grubby hundred dollar notes tied up with an elastic band. However satisfactory this may be in terms of being able to throw it up in the air while jumping on my bed, it presents me with problems; security issues, the means to make poor spending choices, and an ethical dilemma concerning tax declaration. The movement of abstract numbers from one column to another is not quite as emotionally involving as dirty green pieces of paper in a plastic bag.

The view from the bottom, up two and a half thousand years of wall 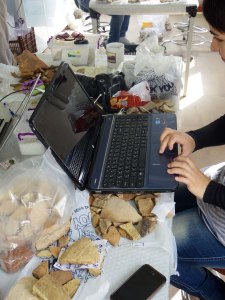 A co-worker delicately balances her laptop on pottery context [209]

Winter has come to Erbil; it’s dark and rainy and I have to wear my coat in the office. The clocks have gone back in Britain and I’m making excellent progress in building up my winter fat reserves via a high diet of beer, kebab and office biscuits. It’s almost time to go home. Unfortunately there are some things I have to do first, chief among which is to write up the site by Saturday. This is a mighty task given the amount of this and that we’ve dug up over the last three years. I’m running out of tasteful pastel shades to colour all the architectural phases for a start, eventually something’s going to have to be magenta. We’ve also run out of space in the tiny plastic office now that most of the table surfaces are being used for laying out pottery. The floor is ankle-deep in biscuit packets and I have to lay the plans out over whichever pot sherds our stand-in ceramicist isn’t currently studying.

I picked up my official kit on the way home from work. White – not the best colour for a new digging t shirt…

I’m not holding out too much hope of finding a lot of writing time on Friday and Saturday. Somehow I’ve found myself running in the Erbil International Marathon on Friday, although only in the 5km ‘family fun race’ for the old and the lame and the smokers. I assume this state of affairs is ultimately my fault although I can’t actually recall how it came about. All I know is that it’s going to make me deeply unhappy, probably at about the 1.5km point. I’ve always thought there’s enough pain and tedious repetitive toil in the world without taking up endurance sports. Now I’m older I understand that some people enjoy performing the same physical action over and over again for a very long time until they feel sick, but I still view these individuals with vast suspicion. My housemate has declined to take part in the Erbil Marathon as she considers it to be a potential terrorist target. When she announced this my very first thought was that if Daesh kill me at the marathon on Friday I won’t have to hand in the excavation report on Saturday, which is a measure of how things are in the report writing department. Should I survive, I plan to drink myself to death during the Rugby World Cup final on Saturday night.

2 thoughts on “Getting over the finish line”