Luckily, I’d already made a naval captain’s uniform during a previous bout of insanity. I think I shall use it on the boating lake

The summer is cantering by and I’m finding ingenious new ways to waste my life. About five years ago it seemed like a really good idea to start organising an enormous Regency party for the 200th Anniversary of the battle of Waterloo. This is now happening tomorrow (for a whole week). I’ve spent the bulk of the last three weeks sewing ball dresses, making Napoleon’s hat, learning how to bake calves tongues and how to play Lillibulero on the recorder. My parents have reached new levels of despair as I’ve filled their home with bonnets and mined all the rugs with lost pins. I also almost shot the cat testing the paintball guns I bought for duelling. Thanks mum and dad for housing and feeding me.

My only concession towards productive (or at least profitable) activity is the two days of work I picked up from Museum of London Archaeology, for which I was forced to find my steel toe-capped boots in the garage and scoop the dead spiders out with a spoon. The job consisted of watching a digger make some holes in some hedges on the other side of Crewe.

A major inconvenience of this was that the hedges were keeping a wide range of animals in order, and a great deal of energy was expended in herding cows, ducks, donkeys, horses and angry llamas with the help of the farmer’s grandson and a Landrover. The actual archaeology was rubbish, or more accurately not there, as all I found was a lot of clay and rotten fence posts and a farmer with some moderately xenophobic views about Polish people. The rather idyllic corner of rural Cheshire was merrily signed over to the property developers so they could cover it in marginally habitable brick boxes to be bought by old rich people as buy-to-let investments. I wonder how long it’ll take the Museum of London to pay me. 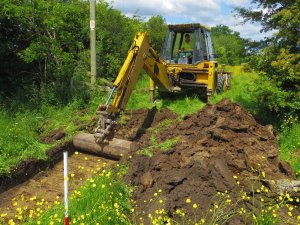 The big yellow trowel making a mess of south cheshire

Sorry this is a short one, I have to pack my Georgian naval uniform and go buy a lot of port.

If you don’t get the title here’s a link: https://www.youtube.com/watch?v=FbwkkXGmFrI