Are you sitting comfortably? Then I’ll begin.

End of another long day. It’s a slice of Iraqi tea and then up the mudbrick hill to bedfordshire for me

Once upon a time there was a dirty, tired, bitter old woman who desperately wanted to finish digging holes in an ancient palace so she could write it up and go home and live happily ever after (or at least watch tv in her pyjamas for a week). But this couldn’t happen because every time she got close to finishing excavating her last room some old crap would turn up and she would tear her hair and curse the gods and clean and photograph and plan it. Today it was a dead baby in a pot. 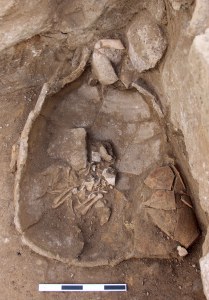 We’d excavated a couple of these external buttress chambers before and they just have a bit of dumping material inside and unsurfaced mud brick at the bottom; this one should have been quick. I’ve been digging room 304 out for nearly three weeks now and difficult things keep coming up to make me unhappy. Strangely childlike things. First there was the farmyard activity play set. This featured a range of animal figurines, vehicle parts and little farmers, all lovingly modeled in soggy unbaked clay and then mashed up. They presented themselves as a mass of sturdy bases from man figurines, the back ends of large-testicled bulls, and beaten up horse torsos with their heads knocked off (I also used to knock the heads off my toys if I didn’t like the way they were looking at me). 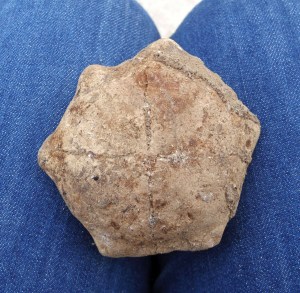 Fully functional pottery rattle; all the cool kids have got them this year

The next thing to turn up was a rattle. A real Old Babylonian, 3700 year old rattle, made of pottery and still rattling. I flipped it intact out of the deposit with my trowel with a merry little rattle and then I gave it a good rattle next to my head and danced a little rattle discovery dance. It’s now been rattled by everyone on the project, by all three Iraqi antiquities reps, by our driver, by the UK Chargé d’Affaires to Iraq and by half her security entourage. On Saturday it will be rattled by the Minister of Antiquities for Iraq. It’s just been x-rayed at Nasiriyah hospital to see what makes it quite so rattley. 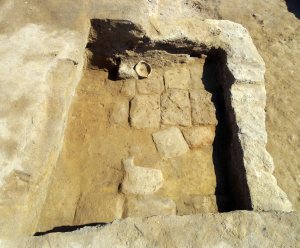 The mud brick playpen. Perfect for all bronze age toddlers

The rattle turned out to be from a partitioned-off corner of the room which is now referred to in all my notes as the ‘playpen’. It’s enclosed by a thin mud brick wall at about waist height with a raised floor and no doorway (in fact the whole room has no doorway; I initially thought the playpen might be the lift shaft). I suppose all things considered I should have been expecting the kinder surprise this afternoon. At the dig house I found a potato which looks exactly like a 5-6 week old human embryo, and no good can come of that sort of omen. 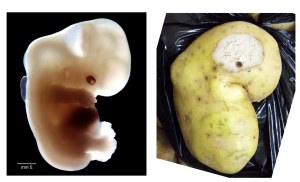 2 thoughts on “In the nursery”