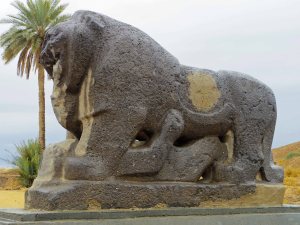 The lion of Babylon making nice with a man

It’s been a week of wind and rain in southern Iraq. This morning the truck almost got stuck in the mud on the way to site again, which would have saved us all a great deal of windy, freezing misery, but it was not to be. It finally dragged itself out by its four-wheel-drive onto the express way where it carried us wailing to site. At night I have been kept awake by the drumming of rain on the roof of my shipping container and by my possessions knocking into the furniture as they wash across the floor. 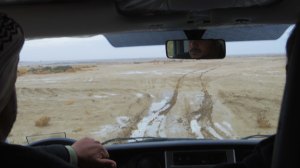 Rani, about to find out if that other button does turn the truck into a hovercraft

We had a special treat this Friday, which was to go and be cold and wet in Babylon instead of being cold and wet at Ur. At least it gave the dig directors a break from our whining, which was probably the point of the exercise. We were passed northward through the heavily armoured hands of four provincial police forces, all of whom cultivate the amateur-enthusiast aura of American bible-belt militias, mixed with a bit of official pomp and a few scarves knitted by their mums. Luckily they took off their more interesting accessories and larger guns to escort us around the site.

Babylon in the rain. It does have atmosphere; specifically that of an abandoned soviet holiday complex built too close to the water table. The majority of it is taken up with Saddam’s enormous empty reconstructed buildings erected in the 1980s, which remind me of a dream I once had about living in a concrete grain silo after the nuclear apocalypse. They at least have the soothing effect of minimalist visual calm due to there being absolutely nothing that catches the eye.

There are some original parts remaining. The raised brick reliefs of the Ishtar gate still give you an idea of the grandeur of the place, and parts of the ancient processional way have been preserved; ornamented on this occasion by the addition of a dead fox artfully arranged on the bitumen lined pavement. Overlooking the whole enterprise is Saddam’s huge palace, which would have given him an excellent view of what he was spoiling. I was hoping to buy something monstrously tacky from the gift shop but in this I was also disappointed as it seems to have been closed for at least twenty years and now had only two elderly men sleeping in it. Instead I sampled the delights of Babylon’s only ladies’ toilet, which had no lock, paper, bin or running water. Cradle of civilization, my arse.

2 thoughts on “Babylon the Great”