As the Blues sense victory, the Reds super-weapon stalks onto the battlefield shooting lasers from its cycloptic eye

It’s a regrettable truth that archaeology attracts far more than its fair share of mentally deranged people, not just within the subject as a commercial and academic pursuit, but also from society at large. Itinerant fruit cakes gather around the subject like kids round a carcass.

We got a call this week from the British Ambassador congratulating us on discovering the world’s earliest shopping mall. The consular staff had read it in the Iraqi press; how we’d found a big building full of little shops. I suppose you could call it that, provided we assume that most shops in the Old Babylonian period sold only broken pottery and dust. This was in fact one of many colourful interpretations of our data by members of the excitable press. The very best example of the genre for this particular project dates to the first test season when two trenches were dug across each other to chase rectilinear wall lines. This produced a sensational article on Wikipedia (recently removed but still available via the Worthy Christian Forum) which claimed we had discovered a temple in the form of the earliest Christian cross, dating to 2000 BC (…). 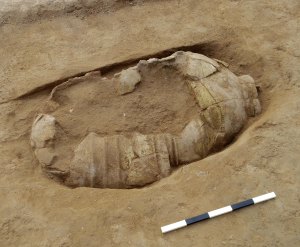 The alien escape capsule is found mostly intact, but did the pilot survive the landing? 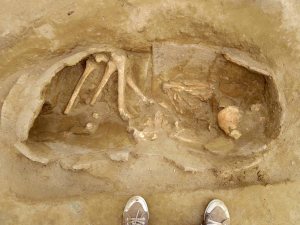 No. That’s ceramic space technology for you

Fanciful tales are by no means restricted to intellectually deficient journalists trying to rake a publishable story out of tedious old crap. There are plenty of crazies out there churning out nonsense simply because they’re window-licking simpletons. This project has acquired its own conspiracy theorist, whose name I won’t mention in case she finds my blog and starts accusing me of supressing the truth about all the alien technology we’re excavating for the US government. She’s written a book about the site, available on Amazon, which as far as I can tell claims to be an investigative piece about our secret archaeological work funded by the oil industry and shadowy government agencies. I’ve only read the sample pages free on Amazon as I refuse to pay her money (even though she claims all profits will go to the Society for Truth in Archaeological Research, which I fear may have but one member). She seems to think we’re either looking for alien technology, hiding the truth about the origins of humanity, covering up radical new evidence about biblical scripture or hunting for Nazi gold. One of those.

I’m not quite sure why she thinks we’re so secretive; the project has a website, a facebook page and a twitter account. Her in-depth research, which she claims to perform in Ohio wearing pyjamas and listening to Bach, mysteriously doesn’t seem to have found any of these. The truth is out there, if you can find it amongst all the crazy shit.

2 thoughts on “The lunatic fringe”