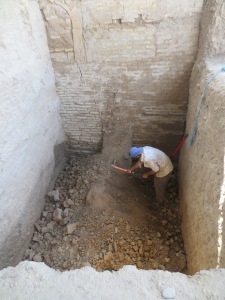 My first week back in Erbil has been unexpectedly like most other weeks I’ve spent in this part of the world – I’ve had many uncomfortable conversations with taxi drivers, several unpleasant interactions with animals and I’ve eaten five times the amount of bread I’d want to eat in an ideal world. The main difference is that I’ve badly strained the muscles in my face which make the appropriate expression for when someone tells you something really terrible. I usually only get to use these a couple of times a year; when friends suffer a bereavement, and at Christmas and Weddings. Now these muscles are getting a full daily workout. Kurdistan has had quite a scare and a lot of people are suffering but most seem keen to make the best of it and keep looking forward. On Thursday night I went to the German bar where the live music was against a background of ‘Keep Calm’ messages including ‘Keep calm and stay in Erbil’ and ‘Keep calm and trust the Peshmerga’, which I’d like on a T-shirt if possible.

The pant-wetting chasm outside the city wall, into which one of us will surely fall to our deaths if we be not first buried alive

On the excavation things have got off to a bumpy start. In my absence the strategy appears to have been to locate the deepest part of the excavations head down with a sense of urgency. Even by my low standards of health and safety the site is now a massive screaming death trap and if we all make it out alive I’ll never write sarcastic comments on risk assessments again. I’ve been recapping some of last year’s work with the local archaeologists, such as why we sometimes write things down and which side of the tape is in metres. I’m sure it will all come back to them.

This time I’m staying with a lovely lady and her lovely dog. It’s all been lovely so far except my second evening in the house when the Bichon Frisé in question spent half an hour in a concerted effort to have violent sexual intercourse with my forearm. This was accompanied by a background refrain of ‘He’s not usually like this!’ Thankfully things have cooled off and we have since developed an attitude of mutual respect for each other’s bodily parts.

Should have left him there, the little…

The other major animal related incident was my heroic rescuing of a kitten stuck on a drain pipe on the exterior of a tall building. I was handsomely rewarded by being scratched and pissed on. It could have been worse in the lottery of cat emissions, as my housemate sagely pointed out.

2 thoughts on “Keeping calm in Erbil”