I’ve been off the radar for a while, in a fairly literal way in fact. But first things first; the end of the Iraqi dig in Kurdistan. It all ended with an uncomfortable amount of paperwork for me as we’d found such a lot of stuff at my site – a valuable reminder to try to find less in the future, or at least to destroy a decent amount of it before anyone sees and makes me give it a number. My relentless toil was interrupted by occasionally scowling at people who were relaxing and having a nice time, and by the house being nearly hit by lightning. The latter was a good source of entertainment(/profound mortal terror). It occurred just as we were finishing lunch, announced by a pant-wetting bang and an explosion of fire and dust, before subsiding into normal general fire. We went to the equipment shed, grabbed some shovels and attempted to help our Kurdish neighbours beat the flames out. This achieved little except minor damage to my sandal-wearing colleagues (I deplore sandals as impractical and unattractive footwear and take great pleasure in observing the many varied ways in which their wearers come to harm) and the brush fire more or less put itself out. The Halabjah fire brigade arrived about fifteen minutes later and were extremely confused to find half a dozen sooty, shovel wielding foreigners (some of whom had burnt their feet) and no fire.

Our work here is done, or at least the fire brigade have told us we can go away now

After a couple of days in Suleimaniyah drinking, smoking and eating an awful lot of ice cream I flew home for a few days, went to Alton Towers to unblock my channels, repacked and headed to charming Swansea (I don’t know if you’ve ever been to Swansea, I think you probably need to go there to understand the resulting cultural whiplash after more or less five months in Iraq. But then I wouldn’t go unless you really had to. Maybe the same goes for Iraq). I then spent two weeks sailing as a watch leader on a tall ship around the Irish Sea, stopping for extended stout-drinking sessions in Dublin, Peel (catching the end of the TT races), Belfast and Peel again. In Belfast we were moored by the Titanic slipway, next to the big studio where they’re filming Game of Thrones, while Ridley Scott had closed the nearby Titanic Experience to film something or other on the escalators, so there was plenty to watch. 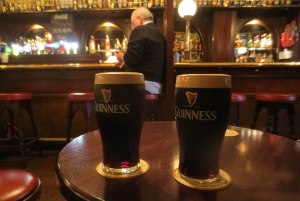 The shape of things in Dublin

We ended up in Liverpool, causing several thousand pounds worth of damage by demolishing the signal lights while crashing into the Albert Dock lock (I had a front row seat for this as I stood by with the bow mooring lines). Many things happened over the next few days in Liverpool, ending up with clubbing in Matthew Street, which was an interesting anthropological experience. Worse things happen at sea they say, though I’m yet to be convinced. In Liverpool I also found that everything in Iraq had gone very shooty while I’d been gone; I mean, it’d only been away a couple of weeks. It’s a bit disconcerting to discover one’s general place of work is mostly on fire.