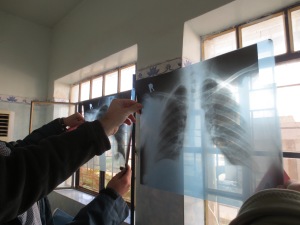 The boys compare torsos: I am satisfied that none of us are in fact androids

We’ve finally had two consecutive full days on site after a lot of delays. These have been mostly due to rain but there was also the many joys of the goverment medical inspection, which involved a full day in Nasiriyah being tested for AIDS and having our chests X-rayed. As one of the healthier looking expedition members (I am one of the few with working knees) I was spared the x-ray, which was lucky as I didn’t want to have a conversation about underwired bras with an Iraqi doctor. They took my blood though, after which I had the sleeve of my jumper immediately, and rather aggressively, tugged back down by a burly old woman, least the men be aroused by the sight of my naked elbow.

On site it was time for some photography today. As we are a highly advanced technological project this was not the usual matter of shinning up a stepladder, putting the camera on auto and hoping for the best. Instead we got out the fifteen meter long telescopic ‘quickshot’ pole (which causes much consternation at airports due to its visual similarity to a rocket launcher coupled with the fact it has ‘Quickshot’ written on the side of it). After buckling staff member A into the harness, and enduring an extraordinarily large amount of faffing, we extended the pole to its full height, giving the impression that A was going fishing for enormous salmon. Various parts of the pole then proceeded to retract into each other, necessitating adjustments with allen keys, then the laptop into which the camera was plugged had to be turned off and on, before finally the camera ran out of battery just as we were ready to take some photos. Isn’t technology marvellous.

Test flight: the photo drone soars through the sky with the grace and directionality of an angry, drunk bee

There had been hope last week that even the camera-laptop-pole arrangement had had its day after the arrival on site of our new photo drone – a small sinister black rotorcraft related to the ones Amazon wants to use to deliver box sets (and the ones America uses to blow up Afghan weddings). This was successfully trialed last week, successfully taking several hundred photos of mud from various heights up to thirty metres. Alas, this brave new archaeological world is now on hold due to minor damage sustained in a heavy landing and it being discovered that we need permission from the Iraqi army to fly it. Thus our dreams are made dust.