Sunrise over the last day on site

I’m on my parent’s sofa drinking milky tea and watching The Dark Knight Rises (where did Bane get his Royal Shakespeare Company accent growing up in that big well?). The end of things in Turkey was a bit of a struggle; planning my huge curving lump of Assyrian city wall took considerably longer than I expected, partially because it was hard to see the bricks under all the dead frogs. Then we ran out of drawing film before I could plan my sections. I ended up having to use a HB pencil on some strange semi-transparent paper we found in the back of a cupboard – the result was similar to that achievable with a child’s crayon on cheap toilet paper.

By the time that was done with I was short of writing-up time and had to work until nearly midnight on Thursday; I came to some fairly bold conclusions, possibly enhanced by the application of sherry to the writing process. By the time I was finished it seemed a bit pointless to go to bed before going to the airport at 2am so I just got drunk with the director instead. We drank neat Stolichnaya and talked about all the awful people who’ve worked on the project over the last fifteen years.

I was almost sober again and not feeling very clever by the time I landed at Istanbul. I then endured a miserable flight to Birmingham, spent thinking about plane crashes and watching Snow White and the Huntsman (which can’t realistically have been as dreadful as I now recall?).

After my parents had picked me up from the station and we’d got the first argument out of the way I passed out on the floor in front of the television and woke up at a beer festival in Crewe Railway Heritage Centre. After all, there’s nothing that gets you over a hangover, jetlag and 48 hours without sleep like staying up to midnight and drinking seven pints of real ale. Today I have been mostly rehydrating. 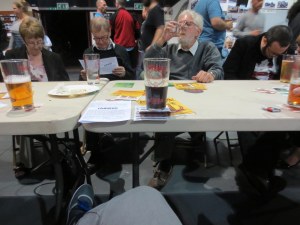 Outside it’s raining. I drink a pint of mild and go into culture shock