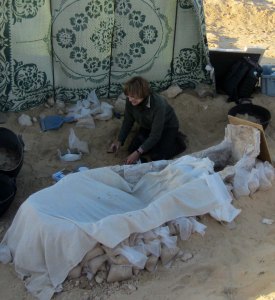 Our conservator after trying to consolidate this coffin for six days. I shall never forget the howl of misery with which she blessed its collapse when we tried to remove it.

Like all dutiful (single) archaeologists I have returned home to my parents for Christmas. The end of the season was pretty busy and tiring, although largely because we kept staying up late to get to the end of the dvd of Our Mutual Friend (BBC, 1998). We managed, in the end, to watch three period dramas, dig up nearly a hundred dead people, send only two team members to the doctor, and give one of our conservators a real life nervous breakdown, so a good season all round.

I’m suffering the usual amount of culture shock. It hasn’t stopped raining since the plane broke through the clouds over Manchester airport, my mother took me straight to a carol service in the local medieval church where I felt odd and then fell asleep, and I’m only now starting to remember that toilets have a flush after two months of throwing the paper down a big hole and walking away.

I’ve been at home now for a whole day during which I’ve attempted to eat my body weight in pork. I bought a quantity of large German sausages and a jar of mustard on my way through Frankfurt airport, only to find 6kg of ham at home due to my parents making a happy error in their christmas meat order. I’ve also had to engage in some highly unsuccessful Christmas shopping – my parents made me promise some years ago that I would desist from buying them any more presents in Middle Eastern souqs. Apparently my mother considers there to be a limit to the number of scarves a person can usefully own. I hope she likes tea towels. I have already presented her with my traditional christmas gift of a large bag full of dirty clothes and sand. 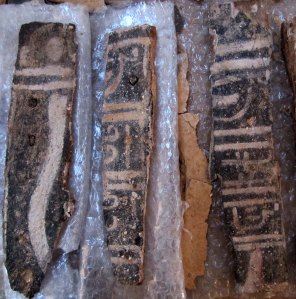 My last find of the season; some mashed up painted coffin bits

This may be my last post for a little bit. I was supposed to be digging in Iraq after new year but there’s been a delay over the security arrangements (quelle surprise) leaving me stuck at home for most of January, digging up nothing but a new overdraft in a very very very wet place.